Six months in: How the SaaS that was built in 7 days is going

Previous articles in this series:

A few weeks before I sat down to write this article, I reshared my two month review of OnlineOrNot around the internet.

Surprisingly, the article was quite popular: 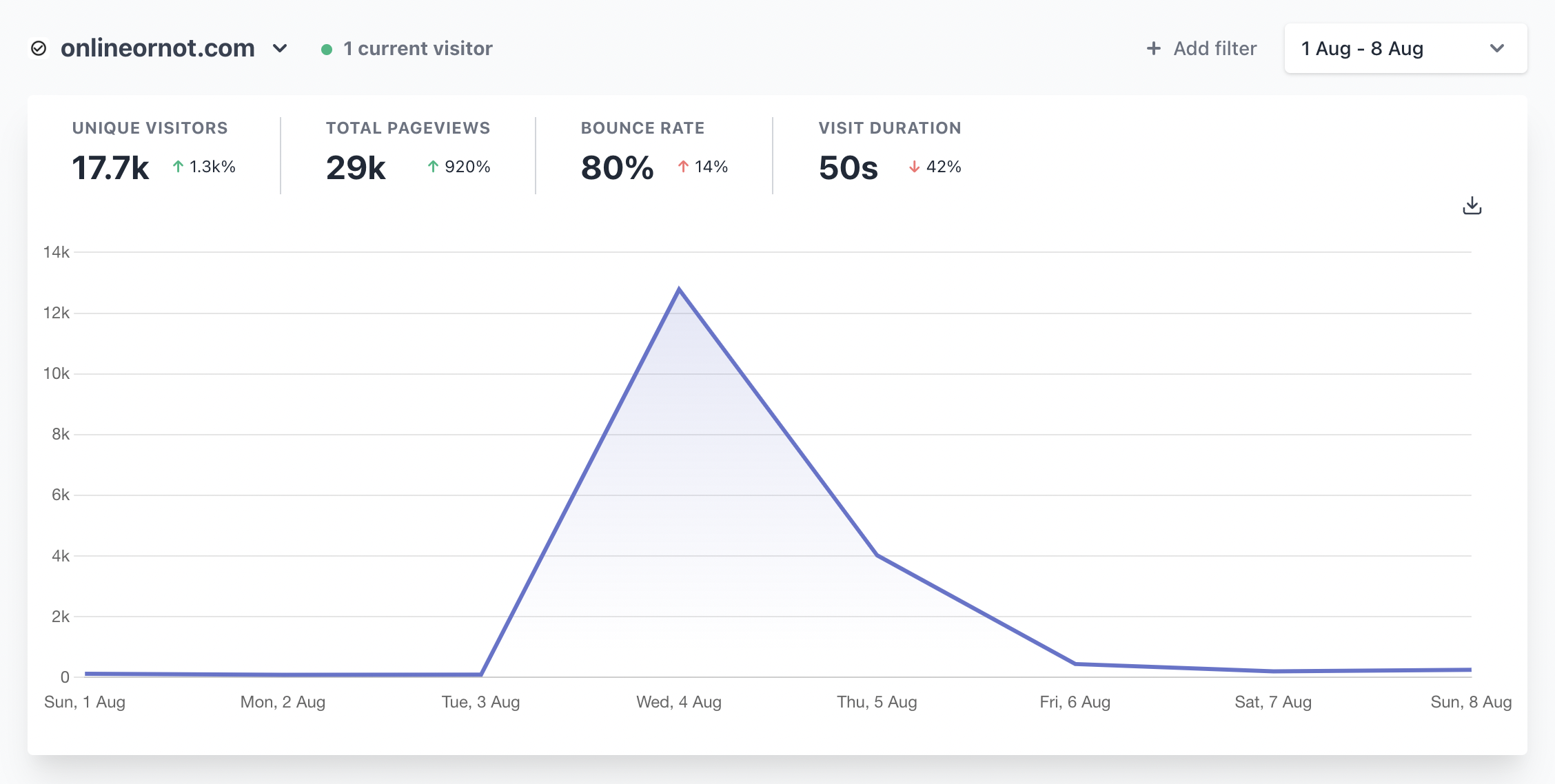 So I thought I'd clear up some confusion for the folks who only just read my two month review: I started OnlineOrNot on February 25, 2021, shipped the first version for people to use on March 2, 2021, and here I am in August writing the six month review.

So - business is going well.

OnlineOrNot is profitable in terms of operating costs (excluding the cost of my own time) and I finally understand what Baremetrics meant when they were talking about the long, slow SaaS ramp of death.

OnlineOrNot's user growth continues to trend up slowly, with a few spiky exceptions: where a blog post has gone viral, or someone popular in the dev community shares it with their followers:

It's worth noting that the vast majority of OnlineOrNot's users come from being patient, and letting them organically find me. Typically that's either via content marketing, or word of mouth (people tend to write far better, more convincing words to their friends than I ever could).

When I first started commiting code for OnlineOrNot back in February, I was using my trusty old MacBook Pro 2011 13". With rebuild times taking several seconds, I grew frustrated and bought myself a new MacBook Air M1, which made the entire dev process significantly faster.

OnlineOrNot has now made enough money to pay for that purchase, which I'm incredibly grateful for. My next MRR goal is $1000 USD.

Quite a bit has happened since I wrote my last update:

About onboarding our first large customer

Back in June, I onboarded OnlineOrNot's largest customer (up to that point), with over 1300 URLs to monitor. It was actually great fun to do - I got to write Python again, and wrangle the user-provided data into a format OnlineOrNot could parse.

For context: as part of OnlineOrNot's Team and Business plans, I offer complimentary setup. This is particularly handy for customers that have tried 5-6 other solutions and keep being disappointed by false positive alerts, and don't want to manually enter hundreds of URLs into yet another system that might let them down.

Thankfully I had experienced and solved scaling issues with my original architecture early on (a blessing of offering a free tier), and was able to start monitoring over a thousand extra URLs with little more than a small percentage increase in my database server's CPU usage.

Where OnlineOrNot did fail was the UI. While the backend could handle the extra load with ease, trying to render over a thousand graphs at the same time would almost crash Chrome. As a quick fix for the customer, I disabled the graphs if they tried to load too many at once:

Eventually I solved the issue by implementing pagination and filtering:

While the UI not meeting the immediate needs of my customers was pretty embarassing, I prefer it over building features my users will never need.

Side note: I've already unshipped a few features that customers suggested and never used. Knowing when to listen to your customers and when to note their feature requests for later is definitely a skill I'm working on.

As OnlineOrNot grows, running the business feels more and more like playing an MMORPG. By which I mean, it's pretty damn fun and addicting, but I am quite limited for time between a full-time job and being in the middle of a moving half-way across the world.

That being said though, I've been maintaining a roadmap of where I see the product going, and committing to the timeframes provided.